Although we don’t currently know how many MPs have submitted letters of no confidence in Boris Johnson to the 1922 committee, almost 30 of the required 54 complainants have now gone on record, increasing the likelihood of a vote after the current parliamentary recess.

Under the Imperial measurement rules we aren’t allowed to say that 47 letters of no confidence about Boris Johnson have gone in – we have to say six florins, a thrupenny bit, two farthings and a tanner have been given to the magic scroll man

The Short Straw Brigade have been wheeled out to TV studios to defend the prime minister and insist that the public wishes to move on, but one MP stepped up to the plate with a voluntary ‘Back Boris’ anecdote. 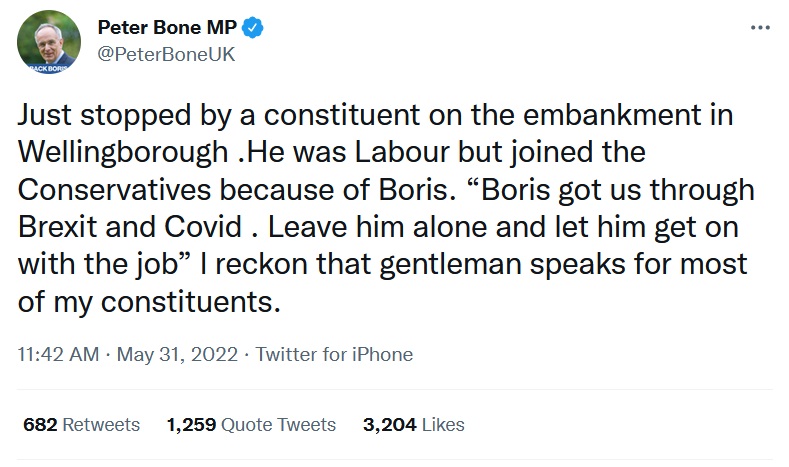 Peter Bone’s claim didn’t contain enough of a ring of truth for some people, and the subsequent roasting was quite the spectacle.

The only thing less real than the person in this tweet is the idea that Peter Bone talks to his constituents. https://t.co/0dSrNEUkc3

Just been stopped in the street by a triple Olympic gold winning British gymnast. He said “I thought I was straight till I saw you on the Chase. Something about weight gain, neck folds and smugness drives me wild.” I was flattered, but politely declined and went on my way. https://t.co/LKfkl967QC

“Hey Siri, show me something that never happened”

I just got stopped by a mechanic in Twickenham. He was on Lewis Hamilton’s pit team but joined Ferrari. Said I should enter my Kia into F1. “It got you through a busy commute. I think you can win the title!” I reckon he speaks for most of my condiments.#ThingsThatWereNeverSaid https://t.co/fOOEy3v5ST

It is not just that the lies are so hopeless, it’s that they think we are all so thick we will believe them. https://t.co/yOyvyXRYua

Just got stopped by a constituent. He said “That Peter Bone is right bloody fruitcake – how the fuck did he become an MP?” I reckon that gentleman speaks for most of my constituents.

You can tell that this is made up because who would willingly stop to talk to Peter Bone of all people https://t.co/ngIzplOwDD

Just stopped Peter Bone in Wellingborough. Told him a load of old bollocks about Johnson and the wazzock believed me!!!! https://t.co/Xg91BWKi0A

He gets about does this chap! He stopped me walking down Queen Street earlier and told me the exact same thing. Word for word https://t.co/9n4Lnb1NPX

Just stopped by Scarlett Johansson in the lane outside our house. She was a Hollywood film star once, but has given it up and moved to Norfolk because of me. “You’re so wonderful, Hugh: let’s get on with the job.” I reckon that lady speaks for most female Hollywood film stars. https://t.co/wGVkT7uJ3l

Yes mate. I was just stopped by Mr Blobby on the benches outside Wilko. He told me the exact same & then proceeded to piss up the wall by Mecca whilst maniacally laughing “Blobby blobbby blobbbyyyyy!” I reckon this gentleman speaks for most of my constituents also. https://t.co/ufCWQadNws

Just got stopped on the street by a doctor for no reason. He said he used to hate people but was drawn to medical practice after being inspired by Harold Shipman “getting it done”. https://t.co/AkSWh1Dlo3

The options in this poll fairly accurately reflected public opinion.

Did this actually happen?

But this poll was a little more official.

WANT MORE POKE?
Get the best of the day’s posts delivered direct to you by joining The Poke+ on Facebook